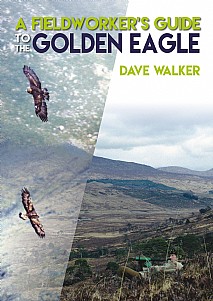 A Fieldworker’s Guide to the Golden Eagle

The Golden Eagle is generally thought to be a well-known and well-documented species. However, much of the available literature is not necessarily in a form that can readily be used in the field.

In fact, although much existing information about Golden Eagles has little supporting evidence it is still largely accepted without question. This book addresses this important issue and in doing so the author queries numerous long-held beliefs about Golden Eagles. He suggests that failure to recognise the limitations of the available evidence is not only detrimental to understanding eagle ecology but that it can undermine conservation efforts. The Fieldworker’s Guide questions the reliability of existing knowledge and promotes a better understanding of the species through improved fieldwork.

With 37 years of active, year-round investigative fieldwork experience of the Golden Eagle, the author has vast knowledge enabling him to shed light on these matters. He has a history of undertaking novel research on post-fledging studies, territories and the impact of changes in land use. In this context he discusses how best to undertake fieldwork to produce objective results, avoiding the influence of expectations and recognising the many pitfalls into which an unwary observer might stumble.

The book objectively reviews all aspects of Golden Eagle ecology, taking examples from many different locations and from site-specific studies in Scotland to compare and contrast the reliability and relevance of the evidence, highlighting the differences between casual and intensive fieldwork. It reviews all the elements of Golden Eagle ecology, from the species status, through the activities and roles of eagles of different gender, age and status, via territories, food and breeding, to habitat preferences, usage and even the influence of weather and observer activity on behaviour and observations. It also gives due consideration to the failed and non-breeding elements of the population, topics that are widely ignored despite such eagles forming the bulk of the population for most of the year.

To provide a better understanding of what fieldworkers and birdwatchers are likely to encounter, the author reviews the month-by-month activity of all classes of Golden Eagle and the influences that affect how their ecology is understood.

‘...the book is filled with interesting and thought-provoking ideas and very worth reading. The photographs are versatile and a good addition to the book’. Luonnon Tutkija

‘...filled with useful notes and facts... ...it is a thorough and interesting review of the species’ conditions at the Scottish breeding grounds...’ DOF Nordjylland

‘will appeal to everybody with an interest in raptors, birdwatchers generally and all those with an appreciation of wildlife, the natural world and conservation’. Cumberland and Westmorland Herald

‘...an interesting addition to your library if you study Golden Eagles’. European Raptors Biology and Conservation

‘...reviews all aspects of Golden Eagle ecology... ...a publication which you can read from cover to cover or dip into at any time... This is a book which I can recommend for anyone who wishes to find out more about the Golden Eagle in the wild...’ The Falconers & Raptors Conservation Magazine

‘If you have a particular interest in Britain’s top raptor, Dave Walker’s book is a must. ...will also be of a wider interest to ornithologists and people interested in Britain’s wild places’. Penrith Today

‘This book contains lots of insightful information, gathered skilfully and painstakingly over years of patient fieldwork. ...this book remains a valuable addition to the library of those interested in reading about, or carrying out fieldwork on, this magnificent bird’. BTO News

‘...the author has vast knowledge… it will be instantly required reading for anyone undertaking fieldwork’ Fatbirder