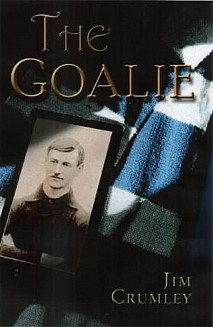 £6.99
978-1904445-11-1
198 × 127mm
128 pages
Paperback
'...Jim Crumley has captured the spirit and the essence of what football meant, and still means to those of us in the city who love the game and its heroes to our very souls'. From the Foreword by Jim Spence Television and Radio Sports Broadcaster

The Goalie is a novel based on the life of Bob Crumley, the longest-surviving member of Dundee Football Club's 1910 Scottish Cup-winning team who became a hero of the streets in his home town. In the spring of that year he stood firm and Dundee F.C. won the Scottish Cup for what is still the only time in its history. But he became a haunted hero, haunted by a dark secret buried deep within his own family, by the hideous, trench-bound years of the war to end all wars, and by his very fame itself.

The story is written by his grandson, who grew up troubled by the same dark secret. He paints a compassionate, thoughtful and often funny portrait of his grandfather as a human being, and in the process attempts to heal an old family wound.

Crumley, a native of Dundee and a lifelong supporter of his grandfather's club, has produced a book from the heart.

'The final. Ibrox Stadium, Glasgow, April 9th, 1910. Sixty thousand folk crammed in. It was like playing inside a grey mist, the walls of grey faces were so thick and so high, like Tay haar blotting the world to so many square yards, but a haar that roared. Clyde were 2-0 up at half-time, strolling it. Five minutes from the end, five minutes from winning the Scottish Cup, it was the same score. The Dundee legions in the grey wall had had enough, were beginning to turn for the exits, feeling a long way from home, the return journey an unthinkable ordeal'.
Sure to appeal immensely to all supporters of Dundee F.C. and also those with a particular interest in football and sport in general.
'...In his book, The Goalie, Balquhidder-based author Jim Crumley attempts to unravel the family secrets that made an outcast of his famous grandfather and celebrate his achievements off the football field. ...He also learned that the city of Dundee had given Bob Crumley a send-off fit for a hero. His funeral was attended by 500 people, including the Dundee FC side of the day and two Lord Provosts. ...Mr. Crumley set about piecing together what little he knew of his grandfather's life and filling in the gaps to create a touching work of fiction...' Press & Journal

'...It's a fascinating picture of people, places and daily life in old Dundee, set against an intensely personal search for truth. Oh, and somewhere in it, there's a love story to make you weep. It does, however, capture what made football so vital a part of the Scottish working man's life. Particularly poignant in the light of current events along at Bob Crumley's beloved Dundee FC'. Evening Telegraph

'Crumley, Neil, McEwan, Lee, Dainty, Comrie, Bellamy, Langlands, Hunter, McFarlane and Fraser. That was the team that won the Scottish Cup for Dundee in 1910. It was to be our only Scottish win.

Jim Crumley has written a poetic tribute to his grandfather, Bob Crumley, the Goalkeeper of that famed side. Written in a style that keeps you engrossed from the first page to the last, it is a mixture of fact and fiction that leaves one with the feeling that he knew the man himself. The Goalie lives in this book, and it's a must for both football fans and others who like the writing style of JC. You'll find plenty of Dundonian banter to boot. ... Jim Crumley does the famous grandfather he never met justice in this short but poignant story. He researched his life, his death, and resurrects him with great respect and honour'. Dundee-mad.co.uk/news

'Football novels tend to be bloated predictable rubbish. This is what makes acclaimed nature writer Jim Crumley's second novel unique. It is a supremely well-written caustic, emotional gem based on the true story of the narrator's grandfather, Bob Crumley, hero of Dundee FC's only Scottish Cup win, who had to live with the consequences of early fame and the unimaginable horror of the trenches in the First World War.' The Herald