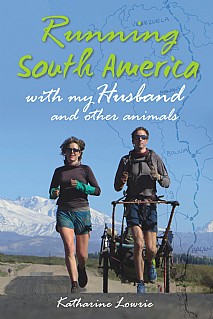 with my Husband and other animals

Running marathons back-to-back, sleeping by the side of the road, giving presentations to remote schools that had never been visited by their own kinsfolk – let alone a pair of gringos emerging barefoot from the forest spattered in brick-red Amazon mud and pulling a bright orange bamboo trailer, this is the remarkable story of personal endurance that gives an engrossing insight into the people and wildlife of South America

It is the story of two everyday runners, Katharine and David, who decided to take on a continent and learn how to run again – barefoot, pushing their bodies and minds to levels they had never considered possible in a bid to become the first in the world to run the length of South America, to give a voice to the wildlife and wildernesses they adore.

Running laid them bare, stripped them of the shell people journey within, so all they had to rely on was their own bare feet. Yet this very vulnerability provided the key to unlocking communities who would fling open their doors, tuck them under their wings and whisper their secrets.

Amazing animals accompanied them: gigantic vaulting stick-insects; cackling macaws who wheeled and pirouetted in the sky, desperately trying to gain a better view of them; and a giant anteater whom they stalked through a snake-infested swamp, so they could stand within an arm’s length as he devoured termites upon the end of his long sticky tongue. It was also an animal, if one of the most diminutive, that nearly succeeded in ending their dreams of conquering the continent – an ant! But when their joints and muscles were screaming, when they couldn’t stand the sight of one another and when prickly heat, blisters and tropical ulcers infested their skin, it was the wildlife and wildernesses that pulled them through.

Day after day, for months on end, running from freezer through desert and into the biggest rainforest on earth, they survived hurricane-force winds, near 100% humidity, swarms of biting insects and some of the most crime-ridden places on the planet. The expedition nearly cost them their marriage, health, sanity and lives. But somehow, they made it to the other end of the continent, 6,504 miles and 15 months later, when they splashed into the warm and much-dreamed of Caribbean Sea.

This a truly amazing and involving story which will be of huge appeal to all runners, extreme sports enthusiasts and everyone with an interest in wildlife and the natural world.

‘...Katharine relates the story of the run in fascinating details and with frankness and humour. She is also...a quality artist, which is demonstrated in the beautiful sketches of wildlife throughout the book. Running South America is an enthralling book and without doubt one of the best I have read’. Wildlife Detective, The blog of Alan Stewart Click here to read the full review

‘...Katharine and David Lowrie (both 39) have made a journey that makes many a marathon runner be envious of envy or awe. ... If you are travelling in nature for so long as Katharine and David experienced numerous funny and absurd, but also dangerous moments. In her book...Katharine describes the various adventurous moments’. TravelBook Click here to read the full review

‘...reading Katharine’s powerful and exciting book about her remarkable adventure is certainly a white-knuckle experience. It takes you deep into the heart of a mysterious continent where you are invited to watch the landscape unfold on a human scale one step at a time. It is a thrilling account punctuated by bizarre encounters with incredible native wildlife...’ Daily Express Click here to read the full review

‘This really is an inspiring book ...a lovely book which will have you flinging off your shoes and embracing life’. Burnley Express, Rebecca Hay

‘If ever a feat of daring and endurance deserved a book it was the adventure on which Katharine and David Lowrie embarked’. Chronicle Live