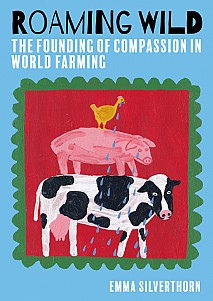 The Founding of Compassion in World Farming

Roaming Wild details the unconventional and pioneering lives of Anna and Peter Roberts, a British couple who were instrumental in making the animal welfare movement a respectable, highly-impactful and worldwide organisation. This book explores the paths that led Anna and Peter to found and steward what is now the world's largest and most successful animal welfare charity from a backroom of their own home, with few funds, and at a time when caring for animals and our planet was seen as 'crankish' and 'sentimental'.

This is the story of their family, their era, influence, their rebellion and prophetic ideas and the development of Compassion in World Farming. It spans the period from the early 1920s when they were born, throughout the decades of their childhoods and World War II, to their highly romantic meeting and marriage in the 1950s, and then the next years of their lives as dairy and chicken farmers in rural Hampshire. This 'ordinary' part of their story preceded their move to change everything by making the 'extraordinary' decision during the tumultuous 1960s, of risking their livelihood, going vegetarian (as animal farmers), and losing the approval of their peers, to found their compassion-driven campaign. This personal transformation was at a time when the British countryside was also transforming, irrevocably and for the worse, when intensive, polluting farms were just taking root, the cruel battery and broiler system had recently been developed, and the countryside's biodiversity was being destroyed with the implementation of monoculture and the profligate spraying of lethal biocides, such as DDT.

The Roberts were at first rejected by the popular animal charities of the day; believing that the public cared only about companion animals or those in circuses, rather than those animals who suffer the most at human hands those in the food chain and so the Roberts family went out alone and set up CIWF in the face of much public derision. Then followed the highs and lows of campaign life, a court battle with an order of veal-farming Catholic monks, famine campaigns in Ethiopia, work alongside comedian Spike Milligan, model Celia Hammond and philosopher Peter Singer, challenging EU legislation, and battles with agricultural and chemical giant Monsanto. Corporate giants like McDonald's were influenced to go free-range, even the British Royal family was challenged to go free-range, and animals were put on the agenda of every major political party in the 1970s and much more.

The story interweaves the personal with the political and documents the highs and lows of family life, the judgement faced when they chose to raise their three daughters as vegetarians in the 1960s, their myriad spiritual quests, including the couple's time spent in the Indian ashram of Sathya Sai Baba, their rewilding of the land near their family home, and the story of their fifty-year love.

This is a tale of an 'ordinary couple with an extraordinary vision'.

This is a remarkable story for anyone interested in animal welfare, the environment, pressure groups and political movements, and the history of that era. It is also a prime case study of what can be achieved with determination in the pursuit of a just cause.