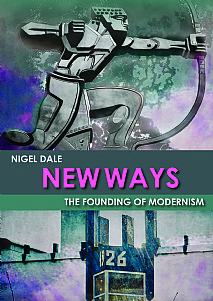 The Founding of Modernism

New Ways: The Founding of Modernism features the rise during the interwar period of a group of engineers, architects, sculptors, ceramicists, artists, furniture-makers, craftsmen and patrons to the forefront of British art and design. Important to the Founding of Modernism was the cooperation between a group of émigré architects and engineers, and their home-grown counterparts who, between them, found ways to bring into being the strict geometric and modernistic forms that were demanded by the Movement.

In the 1920s, the technology of concrete casting was developing very rapidly as was that of steel reinforcement and new developments gave rise to greater possibilities for structures. Initially, expertise, and then the promotion of this new technology to architects and their clients, fell to a number of specialist overseas contracting companies. The early decades of the twentieth century in the UK saw, in place of an architect to contractor relationship, a rise of the new profession of consultant structural engineer. Up to this point, architects had fulfilled the role of both building designer and engineer.

The British Modern Movement was profoundly influenced by this group of European émigré architects and engineers, some of whom remained in the UK thus ensuring that the Modern Movement re-emerged and continued in the UK once peace returned to Europe after WWII.

Through an expert combination of words and illustrations, the author weaves an illuminating tapestry of people and structures in all sectors of life from residential to worship, media to entertainment, commerce and more thus creating a forceful appreciation of the movement.

This fertile period of art, architecture and design was typified by a great commonality of purpose between designers, their clients and patrons. Buildings and artefacts were produced such that their designers might appreciate and wish them for their own use, especially in housebuilding and home-making. Friendships and associations by Modernists in allied professions presented a unified approach to design and patronage.


This beautifully illustrated book will be of special interest and appeal to engineers, architects, designers and anyone interested in the development of the Modernist movement.