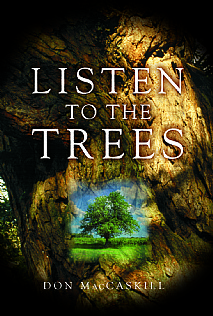 Listen to the Trees

In his introduction, Don MacCaskill wrote modestly, 'I think I became a naturalist'. He was, in fact, one of Scotland's foremost naturalists and a remarkable wildlife photographer as well. In a flashback to his early years in Kilmartin, a village in Argyllshire, we learn of his awakening interest in man's relationship with the wildlife all around him - why was it necessary to kill it? And when accident, or fate, took him into a career in forestry, an inborn love of trees, both in woodland and forest, flourished and became his life.

Photography came a little later, mostly as a record of what he was discovering in the natural world, but is of a remarkable quality in a time when modern aids to getting that special photograph of mammal or bird did not exist.

This book is an account of his first year at Ardgarten, as a young forester newly out of college. Full of enthusiasm and confidence, he thought he knew everything and there was many an occasion when he had to discover that he didn't! It is an honest and often humorous account of forestry in the days after the Second World War when the forest folk of that time, who often lived in isolated communities 'far from the madding crowd', were genuinely interested in the work they were doing. There were some fascinating characters too!

Trees are surely the supreme example of a life force stronger than our own, wrote Don. Some, like the giant redwoods of North America, live for thousands of years. Some, like our own oaks and pines, may live for centuries. All, given the right conditions, will regenerate their species and survive long into the future.

A timely and collectible new edition enhanced by the inclusion of an additional 60 stunning b/w photographs in a hardback edition that is sure to find favour with all readers. A truly delightful book that will be a joy to read especially for those with a particular interest in trees and woods, the natural world and anyone looking for an engrossing read told with humour.

'This refreshing story of Don's early years as a lad and a forester fairly sparkles with his experiences. Amusing, enlightening and enjoyable - anyone who loves trees can smell the forest! ... His word pictures of the fascinating and colourful characters he met and worked with are both artistic and incisive. ...The pictures are a bonus, demonstrating Don's skill at the back end of a camera. An easily read, unputdownable book for all ages from nine to 90.' The Tree Guardian

'... the tale of a man taking his first tentative steps into a deeper appreciation of nature, a world which he finds captivating ... With quiet passion and a great deal of charm, MacCaskill's text paints a picture of an intriguing world which it is more than a pleasure to spend some time exploring.'Stirling Observer

'... In this moving volume he reflects on the great world of trees, the ancient forests which covered much of Scotland, the planting carried out by lairds and estates, the birth and growth of the Forestry Commission, and the social life of glen communities in past days. ... This is a book of heart-stirring nature incidents and reminiscences. It is movingly written and educational. It is also a piece of social history, telling of characters and a way of life now dwindling and gone. It is a commentary on the great forestry issues of our time, essential reading for all those who care about our wildlife and woods. It is a living memorial to Don MacCaskill'. The Scots Magazine

The Wind in my Face
Bridget MacCaskill