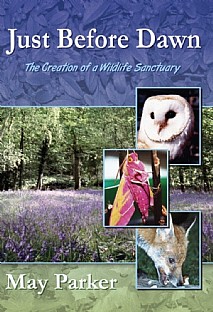 The Creation of a Wildlife Sanctuary

The author describes the glorious but laborious work of converting what had been a general dumping-ground to a rich and productive wildlife haven. As work progressed, May took many photographs and kept observations of the varied wildlife she observed during the many evenings which were spent working and watching in the reserve. How she and her husband achieved their dream of creating their own nature reserve as part of the country house hotel they ran, makes illuminating and fascinating reading.

This grand labour of love over fifteen years was rewarded as the reserve was visited or colonised by many species such as badgers, bats, foxes, and goshawks to the more unusual elephant hawkmoths and the very rare rhododendron lacewing. Interesting facts gradually emerged - an exceptionally fine collection of rhododendron which came from the Kingdom Ward Collection had originally been brought back from Chile, Burma and China for the Royal Horticultural Society many years previously.

The award-winning nature reserve, with its countless animal and plant species, often featured in many wildlife documentaries and was officially opened by Professor David Bellamy.

Just Before Dawn will be an inspiring read for all lovers of nature and wildlife, and will be of particular appeal to gardeners and anyone who wishes to encourage and observe wildlife in their garden.