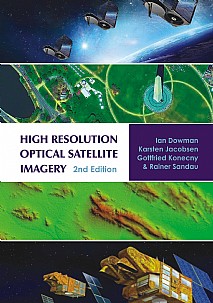 The second edition of this book has been fully updated to include information on optical sensors launched since 2012 and on new developments in technology, particularly on small satellites and on constellations. There is also a new chapter on applications which looks at how products from optical sensors are used by various organisations for the benefit of end users. Information is given on acquiring images and value added products. Examples and case studies from various disciplines and regions are included.

The book is a comprehensive guide to the characteristics and use of high resolution optical images from satellite-borne sensors, concentrating on sensors designed for mapping. It considers in detail the SPOT series of satellites and sensors with a ground sample distance (GSD) of less than 15m, operational since SPOT 1 and particularly the sensors launched since 1999 with GSD of less than 1m

The book explains to students, anyone working in map production and scientists working in fields other than mapping, the way in which high resolution imagery is obtained and the issues which surround its collection and use.

It deals progressively with the fundamentals of mapping from imagery, followed by the key features in the design of sensors and methods of data storage and transmission, including data compression. Subsequent chapters cover the sensors, calibration, sensor models and the methods of determining the orientation elements and extracting coordinates from the images. Rigorous orientation, use of rational polynomial coefficients (RPCs) and approximate methods are covered. Results from tests showing the accuracy which can be obtained, generation of digital elevations models, their accuracy and the production of orthoimages are included, as are image processing and data fusion. Finally, future missions and the issues which face further development are discussed.

High Resolution Optical Satellite Imagery is written by a team of acknowledged international experts, is the only comprehensive text on the subject and has been well received by the geospatial community.


A key text for advanced students, academics, researchers and practitioners in geomatics in general and remote sensing and photogrammetry in particular. It will also be a useful reference for scientists and engineers in other disciplines who use satellite imagery.

Praise for the 1st edition

'Within only a few pages the reader is immediately drawn into the art and science of remote sensing, and how professionals use and supply specific terms and definitions. ...if you are interested in a comprehensive overview of current imaging satellites for high resolution imaging wrapped in basic remote sensing education then this book will be hard to beat.' 3D Visualisation World

'The preface for this book states that it is intended for students, people working in map production, and scientists working in fields other than mapping. ... Does it fulfil that purpose? The answer is a wholehearted 'yes'. ... There is plenty of information that will assist people who need to order data acquisition mission and produce DTM and orthoimagery products. ... There are clear illustrations throughout, many references, an excellent index and a glossary of terms'. Geomatics World

'...is certainly very focussed on geometric principles, but is also likely to provide essential reading for scientists outside the traditional photogrammetric disciplines. ...contains a definitive overview of the current status of high-resolution satellite imaging, which reflects the collective experience of its prominent authors. The text is logically structured and nicely illustrated, with clear figures, and good use of colour. ...is likely to prove popular with a wide-ranging audience, from undergraduate students, to scientists across a range of environmental science disciplines'. International Journal of Remote Sensing

'The book stands as a good reference for students and professionals. ...fills an important gap in studies on high spatial resolution satellite data. The authors explain introductory topics in sufficient detail and open discussions for more advanced subjects. ...an easy-to-read and high-quality book. The authors were able to create a useful reference on the subject for a wide audience, including scientists and engineers. Scholars working with spatial data will also find this reference extremely valuable in their studies'. Photogrammetric Engineering & Remote Sensing