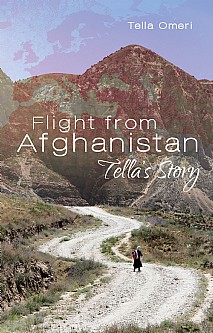 In clear and utterly compelling English, this moving memoir tells the story of the agony, and the ecstasy, of one refugee – and of every refugee.

A must read for anyone interested in the triumph of Afghanistan’s spirit over its seemingly endless suffering.  Sir Sherard Cowper-Coles, British Ambassador to Afghanistan, 2007–2010

Flight From Afghanistan is a harrowing account of what drives a man to flee his home country in fear of his life, the trauma of refugee camps and the dangers he faces even when he reaches the sanctuary of the West. Afghans are the second largest refugee group in the world.

When confronted by certain death at the point of a gun, Tella Omeri, an uneducated boy from a peasant family knew he had no alternative but to put his life in the hands of ruthless human traffickers, living on his wits and instincts. His 11-year flight, which began as a six-year- old child, is a story combining brutality with courage, hopelessness with resilience.

The author asks for no pity, but in his short story he seeks to explain the motivation behind his decisions and paints a radically different picture of life in a troubled region, challenging world leaders and domestic warring factions to find a solution to the endless conflict.

While thousands of refugees flee conflict and danger every day, Flight from Afghanistan shines a powerful light on what it actually means to undertake such a journey, and gives a voice to the often forgotten silent victims of the long running wars in the author’s home country.

Flight from Afghanistan offers anyone with an interest in the consequences of conflicts and wars an insight into the impact on individual lives at a very personal level, and explains why the powerful international forces can never leave Afghanistan alone.