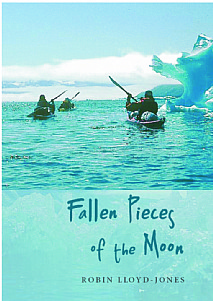 Fallen Pieces of the Moon

Turreted fairytale peaks, glistening snowfields, waterfalls plunging over immense cliffs into the sea, a million tons of ice capsizing - this is the setting for Fallen Pieces of the Moon, an account of a kayak trip along the west coast of Greenland, paddling about 150 miles of coastline in the Nuuk fjords area.

Into the day-to-day account of contending with unsettled weather such as fog, unstable icebergs, midges and bugs by the billion, are woven insights into Inuit culture - their language, their shamanic practices, their hunting and navigation techniques and much more. On the way, the reader learns a great deal about the Arctic animals, pollution and the Arctic environment. Information on the early Arctic whalers, when whole fleets were beset and crushed by ice, is included; and an appreciation will be gained of the hardships endured by the Viking settlers and explorers such as Frobisher and Franklin who suffered scurvy, frostbite and starvation.

Told with humour, the book is endlessly informative and entertaining on topics ranging from cannibalism, kayak rolling and Inuit string games to cargo cults or how the invention of bully beef influenced naval tactics. Fallen Pieces of the Moon is a celebration of a sparse, billion-year-old landscape where the roots of things, both physical and human, seem less hidden. It conveys something of the wonder and awe that Greenland inspires in all who have been there. It describes days of absolute stillness, sliding though shoals of waxing suns; ephemeral cloudscapes on broad-winged breezes; a high corrie where jet black ravens float in a crystal bowl of Alpine air; and the ever-present icebergs like cathedrals of glass, like floating jewels, like fallen pieces of the moon.

Sure to be of huge appeal to all outdoor enthusiasts, particularly kayakers; anyone with an interest in the natural world and environment and those who enjoy travel writing.

‘Anyone who has read Robin’s previous kayaking book ‘Argonauts of the Western Isles’ will not be disappointed... ...one of the most attractive aspects of the bookis its use as a vehicle to introduce all sorts of little side stories and items of information, mostly historical’. Scottish Paddler

‘...a celebration of a sparse and ancient landscape. ...numerous excellent photographs in both black and white and colour. ...is a well-written book that is both thoughtful and thought provoking. It does a good job of communicating something of the wonder and awe that Greenland inspired in the author. For anyone in the arctic and Inuit history and culture, this is the perfect sea kayaking book to enjoy while curled up in front of a warm fire this winter’. QUYAQ

‘...endless interesting facts which will make it essential background reading for anyone going into the Arctic. If you are into sea kayaks or even the wider aspects of travel you will find this a fascinating read with a succession of interesting ideas along with the paddling narrative’. Canoeist

‘...a journey through a wonderland of snow, ice, giant sea cliffs and a look at the west coast of Greenland that few people other than native Inuits can have seen. ...provides a close up of the Inuit way of life, their traditional methods of hunting, navigation, language, string games and their survival...this tale will give much enjoyment. Highly recommended’. Sea Breezes

‘...few people will read this book without wishing to follow in the writer’s paddle strokes.  ...is one of the most engaging kayaking books I have read in a long time and it comes thoroughly recommended to paddlers of all abilities. The only disappointment I had was that it came to an end far too quickly...’ Sea Paddler