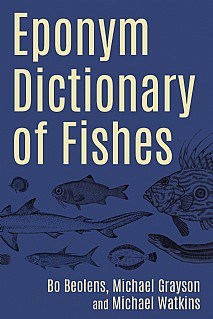 • The definitive reference on the subject with almost 6500 entries

• A fascinating accumulation of knowledge gleaned from experts around the world

The Eponym Dictionary is a series of brief but concise biographies of all those people after whom fish have been named in both the vernacular and scientific names. It also covers names which seem to be eponyms but are not, such as toponyms, names of organisations, ethnic groups, etc. It also shows the networks of scientific collaboration, friendship or patronage. Each species named after an individual is listed with their authors and years for context and wherever possible it is shown how the authors and the eponym are linked.

Every effort has been made to be accurate and meticulous, and the book is also a repository of biographical knowledge that will entertain as well as inform. In conjunction with the other books it forms a database of everyone named in a vertebrate.

For ease of use, this volume is designed as a dictionary, making it easy to find the person behind the name and, in doing so, discover which fish commemorates them and learn something of their lives and background.

For many obscure individuals, these vignettes may be as full a biography of the person as possible, but for the famous it is merely a starting point that shows the enquirer, with confidence, the right person. Some brief entries summarise whole volumes of biography, especially those honoured in a name because of their standing in society rather than their scientific behaviour. There is a vast range of derivations related not just to scientists, zoologists and scholars, but also pop stars, TV and film personalities and writers. There is a whole world of aquarists and fish hobbyists, many of whom have been immortalised for adding to our knowledge of tropical fish. Moreover, there are many people whose only claim to fame is that naming. The parents, spouses, sons and daughters of ichthyologists are well-represented, as are their teachers and even their lovers. The Eponym Dictionary of Fishes is a web of relationships and connections, icons and idols.

This will be a valuable work of reference and of great interest to scientists studying fishes, the amateur ichthyologist, the student of zoology or anyone else interested in taxonomy, nomenclature or fishes.