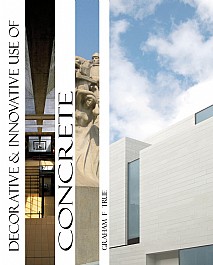 Decorative and Innovative Use of Concrete

This is a broadly chronological account of the decorative and innovative use of Portland cement-based concrete. Contrary to the oft-held belief that concrete is a dull material that is used unimaginatively, this book demonstrates that it can be used in an exciting and inspiring way while benefiting from being a highly durable building material.

After tracing the decorative use of concrete back several thousand years, its development is followed into the 20th century with the invention of Portland cement and its subsequent use in vast volumes. As concrete was used more widely, it also was used more creatively and accounts are included of some of the early exponents of the material such as Frank Lloyd Wright, Le Corbusier, Nervi, Lubetkin and Arup. The brilliance of these and other designers and engineers has provided a legacy of economy and form that is akin to today's current vogue of minimalism.

The variety of scale and form is remarkable and after considering decorative processes and techniques, the book moves into the sphere of art, demonstrating the flexibility of the material.

The book contains a wealth of illustrations, and in the later chapters the author considers the work of selected designers and then presents a large number of examples from around the world. The final chapter looks ahead, taking in current developments in high strength concrete that allow thin, slender applications, also novel self-cleaning concrete and even transparent concrete!

Of one thing we can be certain - concrete is not dull!

This handsome large-format book will appeal to architects, designers and engineers whether in practice, academia or research and students in architecture, design and civil engineering.

‘This book sets out to relate the history of concrete used as a decorative material rather than a structural one occasionally left exposed. And through its no-nonsense approach, concise review and copious illustrations, it does the job nicely. ... The book takes a wonderful tour of 19th- and especially 20th-century uses of the best buildings ever conceived, from Ronchamp to Brasilia, and from F.L. Wright to Calatrava. But this is not a history tome. ...there is plenty of illustrated data on current techniques and advances. ... True’s book underscores the simple fact that there really is no rival material that can achieve so much for so little...’ hinge

‘...The variety of scale and form is remarkable and after considering decorative processes and techniques, the book moves into the sphere of art, demonstrating the flexibility of the material. ...contains a wealth of illustrations...’ Concrete

‘...is a visual feast. It is a lavishly illustrated account of how concrete can and has been used to create striking structures and unusual surface textures. ... A selective history of some well-known and iconic buildings is presented, together with other, less famous applications that deserve greater recognition. ...demonstrates the remarkable potential of concrete... The book stands as a source of inspiration for architects, designers and engineers’. CONCRETE TRENDS

‘...the book ... is an eye opener. The author uses a large number of photos from all around the world to prove that concrete can be used innovatively for aesthetic purposes.  ...provides interesting details on numerous processes...  Designers of concrete structures and products can benefit from using the information provided in this book...’  Civil Engineering, South Africa

‘...I think this is a useful book for designers. It has the ability to quietly inspire and inform its readers... I would definitely recommend to anyone with an interest in the history of the development of concrete and particularly its manufacturing processes...’ Building Engineer

Some Writers on Concrete
Edwin A. R. Trout