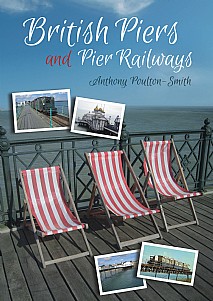 • A clockwise tour, beginning and ending on the east coast at the border of England and Scotland

• Features the whole history of the pier: planning, funding, design, building, railways, ships, modifications, problems, solutions, but most of all the people who ran it and worked on it

The British have always had a special affinity for their coastal resorts and piers are the epitome of the British seaside. This book takes the reader on a clockwise tour of our islands, stopping at every pier and walking through their histories. Yet this is not just a tour of the pier, for it is not the pier that makes the history, but the people who work and walk along it.

Within these pages the reader will meet a prizefighter who achieved fame in a very different sport; learn of several ‘professors’ whose talents were solely being able to leap from the pier; discover why man would ever want to fly from a pier; meet the former Beatle who worked for a pier company; read about the ferries and steamers that carried visitors; the fires which are an ever-present danger; the men who designed and built the piers along with the entertainers, characters, enthusiasts and entrepreneurs who made the piers. Fascinating information is included on how piers became longer or shorter, which piers served as part of the Royal Navy during two World Wars, and the tremendous amount of work and effort it takes to keep the piers open to the public today.

Several piers have embedded rails, with some still being used by trains or trams. These pier railways are described in detail: the engineering, the designs and the changes over the years. While electricity is the sole motive power today, these had once been either steam-driven, pulled by horses, moved by hand or even, in one example, wind-powered by a sail!

With over one hundred photographs, both old and new, this is a tour of the coast of the mainland and two islands. Piers which sadly have not survived are included as well as those which never got off the ground (or the shoreline). It reveals why they were built, how they were repurposed over the years, and their role in the future.

Join the tour and recall the sea air, candy floss, the music, the sounds of a holiday, that day trip, an encounter, a rendezvous or special memory.

This will be an ideal companion for those with a special interest in piers, pier railways and their history, and of great appeal to anyone with an interest in our maritime history and for those living or visiting the seaside.