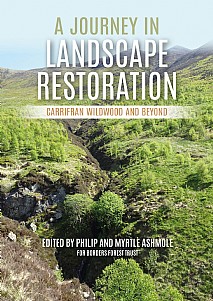 A Journey in Landscape Restoration

Carrifran Wildwood was the brainchild of local people who mourned the lack of natural habitats and decided to act. When Borders Forest Trust was founded the Wildwood became the Trust’s first large land-based project, and after 20 years of work it has become an inspirational example of ecological restoration. Removal of sheep and goats and planting 700,000 trees launched the return of native woodland and moorland, transforming degraded hill land into something akin to its pristine, vibrant, carbon-absorbing state, teeming with plants, animals and fungi, alive with birdsong and the sound of the wind in the trees.

The 40 contributors vividly describe all the challenges of carrying forward bold initiatives requiring close cooperation with local communities as well as funders, authorities, landowners and partners. A core part of the book is devoted to how nature asserts itself when given a chance. It includes ‘before and after’ surveys, describes vegetation changes – some of them unpredicted – following removal of sheep, cattle and feral goats; unique documentation of the dramatic changes in bird populations during the 20-year transformation of Carrifran valley from denuded land to a restored mosaic of woodland and moorland habitats; discussion of the gradual development of a diverse range of invertebrate animals; and descriptions of the rich communities of fungi and mosses, many of them newly-recorded in the area.

The book concludes with discussion of the role of restoration ecology in addressing the biodiversity crisis and climate change. This is the extraordinary story of how a group of motivated people can revive nature at a landscape scale.

This inspirational book will be of huge appeal to anyone with an interest in the natural world, wildlife, restoration ecology and conservation.

'…is a fascinating book, demonstrating what community buy-outs can achieve. The chapters show the logical process and progress, and the book is illustrated with photographs, maps and explanatory text boxes on almost every page. The book and the habitat improvements are a credit to everyone involved'. Wildlife Detective

'…a comprehensive piece of work… to see the data and before and after pictures shows what a remarkable achievement this has been… This is an essential, heart-warming and positive read'. British Naturalists Association

'...is a book full of good science, good advice and very human endeavours by some exceptional people who will leave a rich legacy for the eco-savvy generations... Read, enjoy and be inspired!' Reforesting Scotland

'It should be called ‘Inspirational’, because reading it just fills you with fire... A must-read for all birders'. Bird Watching Magazine

'…this fascinating and enlightening book… ...a celebration of what has been achieved...' Undiscovered Scotland

‘…this celebration of the astonishing levels of ecological restoration that have stemmed from two decades of concerted effort across a once barren valley in the Scottish Borders’. John Muir Trust Journal

‘…a truly uplifting book that chronicles the genesis, development, and expansion of the original Carrifran Wildwood… Any person interested in an inspiring and heartfelt restoration success story should appreciate the book… a thorough, engaging, and overwhelmingly inspirational account of the Carrifran and Wild Heart projects’. David J. Robertson

'...this is a book to uplift the spirit and inspire action to counter some of the gloom... there is much to learn from this book, particularly for anyone inspired to take action of a similar vein. As an example of community working, as well as how to facilitate the natural development of a landscape it is truly an exemplar and an inspiration'. The Niche, British Ecological Society

'...this celebration of the astonishing levels of ecological restoration that have stemmed from two decades of concerted effort across a once barren valley in the Scottish Borders...is a mightily deserved celebration of those 20 years of effort in this valley and the astonishing results, that giving nature a respite from centuries of exploitation, can produce. But it is so much more than that'. Mike Daniels, John Muir Turst Journal

'...is aimed at a wider audience, being liberally sprinkled with colour photos, many of which are good quality, a few of which are outstanding'. Dumfries and Galloway Antiquarian Society

'The book is a veritable cornucopia of ideas and practical management, with developmental ideas and concepts for us both now and in the future, its scope is colossal... It is an easy and stimulating read. It deserves to be re-read since it is so full of factual material and ideas'. Scottish Forestry

'...is the story of the first two decades of one of the most impressive landscape restorations of the early decades of the 21st century... an inspiration to everyone who longs to see the deserted hillsides of Britain restored to natural habitats that foster wildlife and offer a solution to the increasing problems of climate change'. Peebles Life

'...is a book full of good science, good advice and very human endeavours by some exceptional people who will leave a rich legacy for the eco-savvy generations who are coming to the fore now. Read, enjoy and be inspired!' Reforesting Scotland

'... a veritable cornucopia of ideas and practical management with developmental ideas and concepts for us both now and the future; its scope is colossal...The accounts are fascinating'. C.O. Badenoch

The Arctic
Per Michelsen, Richard Sale