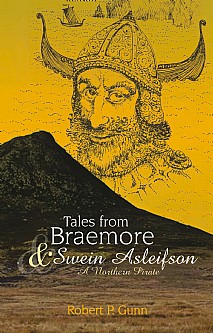 During the long winter nights and before the advent of television, people in Caithness used to hold informal gatherings in each other's houses, and spend the night in general conversation around the firesides. These gatherings were known as ceilidhs. The news of the day was always discussed along with other topics of interest. The conversation very often turned to events of long ago and it was then that the storytellers came into their own.

With his customary enthusiasm, Robert Gunn has selected a number of these tales and historical events with links to or origins in Caithness, to provide a fascinating read and a few surprises! The author recalls that in the Dunbeath district there were several storytellers who held their audiences spellbound with their tales of long ago. One such story was The Prisoner's Leap – this raised considerable debate as to whether it was possible to jump the gorge at Crageneath although the conversation often ended with people agreeing that the distance between the two rocks at the gorge was much less than it was currently!

Most people believed that an Earl of Orkney was killed at the battle of Leodibest and that one of the stones near the road marked his grave. Alexander Gunn's recollections of his schooldays at Badbea will be an eye-opener for many when they read of the terrible hardships that the children who lived there had to endure.

The son of a Norse governor, Swein followed a life of raiding and looting which encompassed Northern Scotland, Orkney and Shetland, Ireland and the Isle of Man. He travelled as far south as Wales and the Scilly Isles and became one of the most powerful men of his time, commanding fear from the people, respect from Earls and admiration from Kings. This book brings together all the action, double-dealing and bloodthirsty adventures surrounding Swein and his people.

This new, combined edition of the wonderful collection of stories and folklore from Caithness and the historic adventures of Swein Asleifson will be of continuing appeal to all Caithnessians, both at home and abroad. It will also be of much interest to visitors to Caithness and anyone wishing to know more of the folklore of the county.