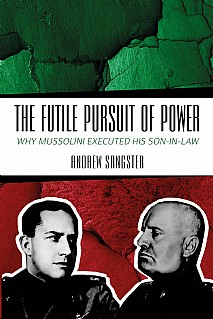 The Futile Pursuit of Power

Why Mussolini Executed his Son-in-Law

Italian history is not widely read but the period under Mussolini’s shadow is both interesting and relevant to understanding the wheeling and dealings of the 1930s and into WWII. Through sheer nepotism Galeazzo Ciano married Mussolini’s daughter and became Italy’s Foreign Secretary, the youngest in Europe and at first scorned at home and abroad.

There are many salacious stories of their open marriage and promiscuity, but the focus is Ciano’s political life as a man regarded as second only to Mussolini. Through his diary and diplomatic papers, access is gained to the European diplomatic squabbles of the 1930s. The study of Ciano provides insights into Hitler and his leading henchmen, especially Ribbentrop and Göring, as well as the Spanish dictator Franco. Most importantly the figure of Mussolini is exposed in both his professional and somewhat dubious private life.

The book explores the question of the Italian Fascist attitudes towards the Jewish population, the Vatican, and the monarchy. The Nazis at first courted him but soon realised he saw them for what they were, and he proved incapable of containing either his criticisms or the growing threat against him.  Ciano finally turned against Mussolini only to find after his master’s downfall that he had left himself encircled by personal enemies. His flight to Germany initiated his descent into personal chaos, leading to his trial and execution in Italy seemingly supported by his father-in-law.

Perhaps the strangest twist in the personal story is the way his wife Edda turned to support him after years of an open and promiscuous marriage. There was considerable German and international interest in his diaries and diplomatic papers because of their revealing insights. He has been described as egotistical and arrogant, clever, perceptive, corrupt and a man with potential. Many despised him, but historically he was an interesting personality who above all left historians with some incisive observations of the critical years of 1935 to 1942.

This will prove an engrossing book for anyone interested in the political and military history of the Second World War, Italy and the key figures of that era.

In the Shadow of Power
Bob Whittington