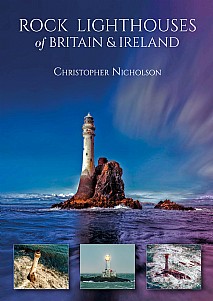 Rock Lighthouses of Britain & Ireland is a new edition of the classic work on the subject but with some of the most famous Irish rock lighthouses included. The text has been updated to include the modern technology being used by the lighthouse authorities, as well as all the historical advances made over the centuries at British and Irish rock lights. This is complemented by scores of new  and many stunning photographs as well as historic plans and drawings, many of them highly colourful and artistic, as used by the original lighthouse builders. At the end are comprehensive and detailed tables about all the rock lighthouses maintained by the three lighthouse authorities.

Building on the acclaim received for the earlier editions, it brings the history of these iconic structures completely up-to-date, from the days before the first granite block was laid, through their construction, automation, the disappearance of the lighthouse keeper, right up to today’s totally automatic operation.

These are some of the world’s most famous rock lighthouses, and their stories of men battling against Nature’s most powerful forces to build a structure designed to save lives on a seemingly impossible site. Rock Lighthouses of Britain & Ireland spans the centuries between the world’s first rock lighthouse on the Eddystone reef, to the very last rock lighthouse constructed in the traditional style – on Ireland’s Fastnet Rock – and accordingly it will remain the premier book about rock lighthouses.

Praise for the previous edition:

‘...what a book it is, with new and revised text, information, layout and superb illustrations ... This is truly a feast of good reading for casual reader and serious pharologist alike. ...a rollicking good book, a copy of which really ought to be on everyone’s sagging bookshelf. Buy and enjoy’. LAMP

I regard this as the best book I've yet read on the subject and if anyone wants an engrossing history of British rock lighthouses with a potent dose of high peril on the seas you probably need go no further.

Something haunting about the photos featured in this book and the stories of their construction and maintenance are epic.

The way it's written you really get a feel for the elements and this book is never anything less than absorbing. The author's enthusiasm for these towers and admiration for their architects and builders is palpable.

An exceptional read on the subject of pharology.

Contents: Out of the darkness – A history of the British and Irish lighthouses services; Eddystone – The beginning; The Skerries – The price of generosity; The Smalls – A rock lighthouse on legs; Longships – The Land’s End light; The Longstone – Grace Darling’s light; Bell Rock – The start of the Stevensons; Tuskar Rock – The lighthouse that almost killed a King; The Skelligs – The lighthouse at the end of the road; Skerryvore – The noblest of all; Bishop Rock – The Blue Riband light; Fastnet – The last of the great rock towers; Muckle Flugga – The northern light; The Bull and The Calf – If at first you don’t succeed…; Wolf Rock – The curse of the Cornish wreckers; Dubh Artach – Guardian of the Hebrides; Chicken Rock –  A Manx crag; Flannan Isles – The Marie Celeste lighthouse; Rockall – ‘The most isolated rock on the surface on the earth’; South Rock – A remarkable survivor; Rock lights – A new era begins; Appendix – Rock lighthouse data

This handsome book will remain an essential volume for lighthouse enthusiasts, those with an interest in maritime history, and will appeal to all who enjoy tales of endeavour, ingenuity, the power of a wild sea and dogged determination.

A Natural History of Lighthouses
John A. Love